The original village is mentioned in 1295 in connection with the uncertain predicate of Martin of Janovice. It came into the possession of the Šternberk family sometime during the first half of the 14th century, which annexed it to the estate of the Český Šternberk Castle. The settlement’s expansion and its gradual transformation to a town let is related to this family. The attribute ”Uhlířské”, reflecting the fact that charcoal was burned in the surrounding forests for the needs of the Kutná Hora mines and the mint, began to be used as part of the name of the town let since the beginning of the 15th century. Pottery making flourished in the town in the 19th century, making use of distinctive local ornamental motifs.
The oldest structure in the town let is the little late Romanesque cemetery Church of St Giles (sv. Jiljí). Its nave dates back to around 1200, being rebuilt to a Gothic presbytery in the middle of the 14th century. Wall paintings with biblical motifs dating back to the 1490s were uncovered inside the church in 1895. It was puristically restored following a fire in 1904. It is a single-nave building made of quarry stone and with details from red sandstone. On the north side is the original little Romanesque window.
However, the small church was insufficient for the expanding town let as far back as in Baroque times, and so construction of a new church on the square began. This new church was dedicated to St Aloysius and was completed in 1795 by Alois of Liechtenstein. The fact that it faces the north is interesting, as this is unusual for churches. It is a Late Baroque single-nave building with a right-angled presbytery with a vestry and a prism-like one-storey tower with an onion-domed roof, which has a portal dating back to 1794. The one-storey deanery building, with its coloured plaster and mansard roof, dates back to 1763. House no. 172 was a former coach inn from around 1740. A synagogue from the early 17th century, rebuilt after 1913, stands in apreserved Jewish street. 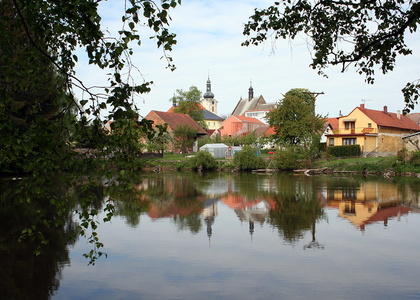