Today, only a semi-ruined cylindrical tower rising above by village houses testifiesto the former importance and fame of Talmberk Castle. The first report about the castle dates back to 1291, when property was divided between the sons of Hroznata of Úžice. At that time, the estate was acquired by Arnošt, who completed the construction of the castle on the rocky promontory above the lake in a deep valley, after which he began using the predicate “of Talmberk”.
Under Diviš of Talmberk at the end of the 14th century, the castle was besieged and captured by soldiers of Havel Medek of Valdek as part of a neighbour dispute. Reconciliation only came about after seven years, when the court sided with the original owner and mobilised the provincial militia against Medek, which recaptured the castle and liberated its rightful owner. The Talmberk family lost possession of the castle sometime during the Hussite Wars or shortly thereafter,and its owners changed quickly from then on. In 1533, it was part of the Chlumské estate and is talked of as being abandoned. Stone from the castle was used as building material for the cottages of the village, some of which were also built directly among the collapsed walls of the castle. 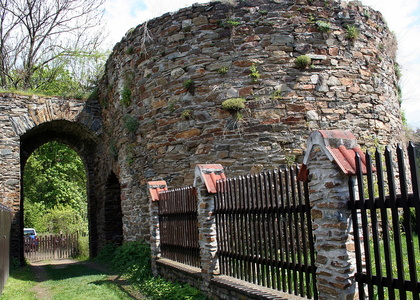