A place of pilgrimage in the Sudějov region lies hidden in the dense forests. The predecessor of today’s pilgrimage church was a wooden chapel with an image of St Anne built over a spring allegedly having curative powers. After it was burned down, Count Karel Joachym Breda, the owner of the Pečecké estate, had a pilgrimage church built at his own expense, which was completed and consecrated in 1725. It soon became an important place of pilgrimage, and donations from pious pilgrims and benefactors were used to fund the gradual building of cloisters with three chapels and corner towers, completed around 1742. The decoration of the chapels is the work of the famous Czech painter Vaclav Kramolín. The first chapel is adorned with a painting of The Assumption of Our Lady. The second is dedicated to St James, with its dome-shaped vault bearing a painting by Jan Sobieski depicting the liberation of Vienna from the Turks in 1683. The third chapel is dedicated to the ”Crucifixion of Jesus Christ”. During the Napoleonic Wars, the cloister was severely damaged and became dilapidated, so that it had to belargely demolished in 1819, except for the outside perimeter walls. The entire complex was built in the Baroque style. The church nave forms a rectangle, in the eastern part of which the presbytery is separated by a triumphal arch and finished with a circular apse.The main altar is built over the original spring. From here leads a channel along which water flowed into a small chapel next to the left tower. The water then flowed into the parish courtyard, the location of the former baths. A staircase with two stone statues of angels leads to the church’s facade. Above the portal is a votive inscription with a chronogram and the builder’s  mark. A statue of St Anne stands in an alcove in the middle. A small exhibition on the origins and history of this place of pilgrimage can be seen in the restored Baroque parish opposite the church. 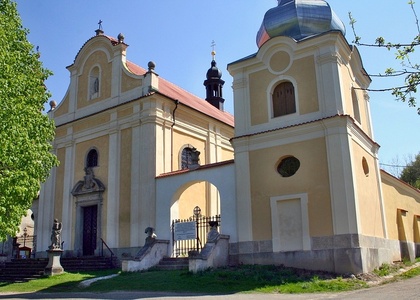