The first written mention of the village dates back to 1352. Kácov was promoted to a townletat the end of the 14th century. Kácov Chateau stands on the site of a medieval fortress from the 15th century plundered by serfs during a peasant rebellion in 1627. It gained its current appearance after several reconstructions in 1726 – 1733, during the timeof Grand Duchess Anna Maria of Tuscany. During the 19th century, the chateau belonged to individual members of the ruling Habsburg dynasty and was nationalised after the establishment of an independent state. In 2008 it was transferred to the village, which is looking for a suitable use for the chateau. Today, the chateau houses an exhibition about the history of Kácov as a centre of handicraft production and trade as well as a major tourist resort of the Posázaví region. It also houses a painting gallery, which hosts alternating exhibitions of paintings, sculptures and collages two to three times a year. Of the original interiors,only the so-called blue lounge, chateau hall and chapel have been preserved, and so an exhibition of old radio receivers has been added. This exhibition displays several dozen items, ranging from crystal sets, vacuum tube radios and radio-gramophones, right through to transistor radios. The guided sightseeing circuit takes 45 minutes, after which you can get comfortable in the chateau’s cafe offering many types of coffee, wine from its own wine shop, and of course desserts and cakes. Whilst relaxing in the cafe, you can peruse the large collection of old coffee grinders on display.
The restored brewery, which was established on the Kácov estate back in 1457, has been gaining in renownin recent years. Amber fluid had been brewed at the premises for 500 years until 1957, when it was closed down. Thankfully, production was restored back in 2002, and today the brewery once again brews the great Hubertus beer, with an annual output of 20,000 hectolitres. The brewer adheres meticulously to tradition. The local beer is made from high-quality raw materials – Žetec hops and Czechmalt. Water used in the production process is drawn from the brewery’s own well. Hubertus beer is unpasteurised and has no chemical additives, therefore retaining its original character and all the vitamins. In recent years, the Kácov brewery has become a not-to-be-missed stop for the numerous groups of canoeistson the Sázava River. The local beer can be enjoyed right in the lager cellar during a tour of the brewery conducted by attractive guides.

Opening hours and entrance fee for the Kácov Chateau 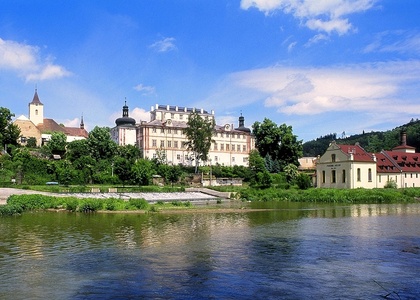