Zruč is an unfairly omitted town of five thousand people spread out above Sazava River. The first written mention of this town dates back to 1328. Several prominent families have made their mark in its history – the powerful and belligerent Kolowrat family, after whom part of the fortifications of the original castle have been preserved, the Kalenic family, whose coat of arms has been assumed by the town, the Löwenthal family, who established the first chateau park, and, above all, the Schebek family, who had Zruč Chateau reconstructed into its present form according to the plans of Jan Vejrych, a leading Czech architect (1891 – 1909). Like the city of Zlín, Zruč’s fame was the result ofthe footwear industry during the First Republic. The town’s layout still bears the typical characteristics of Baťa’s architecture. However, it has changed dramatically over the past few years. The chateau has been particularly metamorphosised. After being acquired by the town in 2003, it was extensively reconstructed in 2006 – 2010.This was financed from European funds. The reconstructed chateau attracts visitors with its permanent exhibition titled ”The Kingdom of Dolls and Teddy Bears” and the knight’s path of ”Milota of Kolowrat“.The regional museum has an exhibition titled ”From the Cobbler’s Bench to Baťa“, which illustratesthe development of shoemaking in the town. As of 2015, Zruč Chateau houses the first museum of paddling in the Czech Republic. This museum displays not only interesting exhibits of boats, but also other equipment forming an inseparable part of paddling. Another of the town’s attractions is the newly built Babka Lookout Tower. This wooden lookout tower with metal elements and a staircase is located about 2 km to the north of Zruč nad Sázavou in the direction of Jiřice. It stands at an altitude of 451 metres above sea level, with the observation deck hovering 24 metres above the surrounding terrain. After climbing 130 metal grate steps, you will be afforded a view of the entire town as well as its surroundings. To the south-east is Melechov Hill near Ledeč nad Sázavou, to the south-west Velký Blaník Hill near Vlašim, to the east we can see Fiolník Hill near Vlastějovice and to west lies Jordán Hill and the village of Chabeřice. 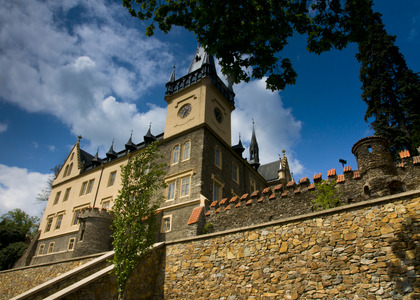