Points of interest worth seeing in the picturesque town let spreading out on the slope of Poupil Hill are the originally Romanesque Church of St Lawrence and, above all, the remains of the fortress with a small castle standing opposite. The first known owner of the local fortress was Rudolf of Zbraslavice, who was mentioned in 1260 as one of the burgraves of Prague Castle. Perhaps it was in his time that a fortified complex surrounded by a moat and an earth embankment was built on the edge of a rocky promontory protected on three sides by steep slopes. Entry to the fortress led from the church across the now-defunct moat. The opposite side was occupied by a two-storey residential building, of which a vaulted Gothic cellar divided into three rooms has survived. The fortress was inhabited by the Podolec family of Podolec during the Hussite Wars, with the town let’s symbol containing an eagle’s claw derived from theircoat of arms. The fortress was rebuilt in the Renaissance style in the 16th century. During the 18th century, however, its role was gradually taken over by the chateau built on the site of the former meierhof, or building occupied by the estate’s administrator. The fire of 1809 meant the definitive end to the fortress. Farm buildings were constructed on the remains of the residential buildings, completely changing their original appearance. Today, the whole complex is being gradually reconstructed. The production of  beer was reinstated in the chateau’s premises in 2015. The Zbraslavice Chateau Brewery continues the Zbraslavice brewing tradition, which dates back to the 16th century. The area between the chateau and the remains of the fortress is used as an open-air gallery for works of art produced during the regular June sculptural symposium. The whole area is freely accessible. 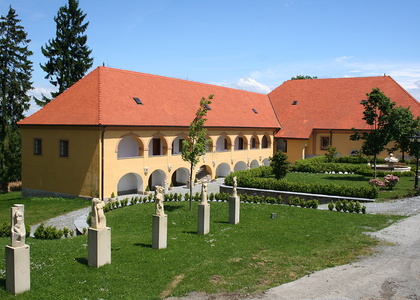