The massive five-storey inhabitable tower built from red gneiss on a promontory above a pond is a testament to the great age of the Malešov Fortress. It was founded by the Lords of Leština at the start of the 14th century and later rebuilt by the Ruthard family, wealthy Kutná Hora patricians. It was seized by Praguers in 1421, but just three years later the fortress was witness to their bloody defeat by Žižka’s army. The fortress then changed owners quickly, until it was acquired by Jiří Voděradský of Hrušov at the end of the 16th century. But the Malešov estate did not bring him much luck. Jiří had acquired this property by usury and his wealth became a thorn in the side of some of his creditors. He was arrested upon the order of the Emperor and soon executed for charging exorbitant interest. Most of his property was confiscated by the imperial chamber. After the Thirty Years‘ War, the estate was acquired by Jan Špork, an Imperial General and Imperial Count. The Špork family resided mostly on their estate in Lysé nad Labem andso Malešov continued descending into disrepair whilst in their possession. In 1730, the tower of the fortress was converted to agranary and was used solely for agricultural purposes since that time. Today, the new owner is trying to restore the fortress to its medieval grandeur. 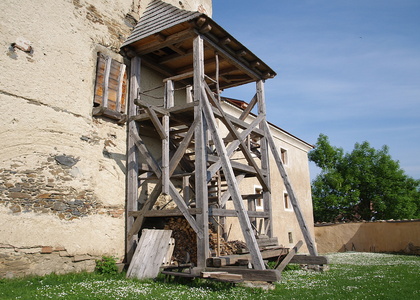