The city of Čáslav was founded around the mid-13th century by Přemysl Ottokar II, the King of Bohemia. The large picturesque square is the dominant feature of the historical centre, featuring a Baroque Marian column, a Baroque fountain,a monument to Jan Žižka of Trocnov by the sculptor Josef Václav Myslbekand theBaroque town hall from the 18th century.The skull of Jan Žižka of Trocnov, the Hussite army leader, is reverently preserved in the Žižka Hall of this town hall. The originally Gothic Church of St Peter and Paul, built on the site of the Romanesque Church of St Michael from the beginning of the 12th century which now servesas a vestry,is among the oldest of the local landmarks. The church was the venue for the provincial assembly of 1421, which entered historyas the “Čáslav“assembly. In 1910, the remains ofJan Žižka were discovered in the chapel under the tower during the course of reconstruction work.
The ČáslavMuncipal Museum was built in 1884 as one of the first in Bohemiadesigned specifically to serve as a museum. You can inspect the original exhibition from the 19th century. The city isalso home to theoldest stone theatrein eastern Bohemia – the Dusík Theatre, completed in 1869 and named in memory of thecomposer and pianist Jan Ladislav Dusík. Other important monuments include the town fortifications from the 14th century with Ottokar Tower, one of the oldest and best preserved in Bohemia. A more recent historical landmark isthe Jewish Synagogue, built in the late 19th century according to the plans of the Viennese architect Stiassny, the facades of which are in the Moorish style. And, last but not least, Čáslav also has aMuseum of Agricultural Equipment. Its unique collection of tractors and historical ploughs is among the most important and largest collections of its type in Europe. 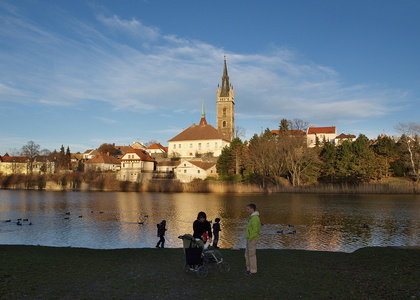