The Kutná Hora region in the palm of your hand ...

If departing from Kutná Hora by car along road number 2 in the direction of Prague, after about 10 minutes you will arrive in an inconspicuous village called Miskovice. Turn left at the first opportunity upon leaving this village, and this will take you to the village of Vysoká. Once here, park your car by the Romanesque Church of the Visitation of the Virgin Mary and depart by foot, following the green tourist signs to the top of the Vysoká Hill (471.2 m).

In the woods near the top you will be surprised to find the remains of the perimeter walls of a Baroque summer palace with the St John the Baptist Chapel, the so-called ”Belvedere”. This summer palace with a chapel was built for Count F. A. Špork in 1695-97, probably according to the plans of G. B. Alliprandi. The complex changed owners several times and, even though it burned down at the beginning of the 19th century, the place kept its unmistakable atmosphere. A lookout is also situated at the top of the hill, where you can enjoy an unconventional view of the silver city.

You can also complete this route on a bike, in which case we recommend following the blue tourist signs from Palacký Square in Kutná Hora until reaching the ”Škvárovna” crossroads, where you will join the green route and continue via Miskovice to Vysoká.

Whether by car or by bike, from Vysoká you can extend the trip and explore the picturesque villages around Kutná Hora. From Vysoká, head towards Karlov. Then turn left to Tuchotice, from Tuchotice head straight to Nové Lhoty and then to the right towards Roztěž.

From Roztěž, continue to Malešov, where you can see a Gothic fortress from the 14th century, returning back to Kutná Hora via Poličany. 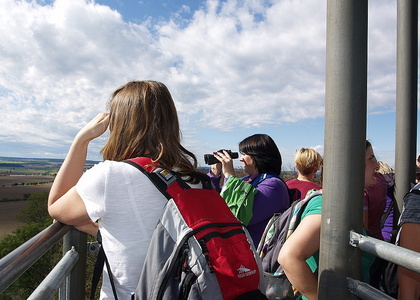