In late 2009, art history circles were abuzz with the news that on 8th December the Sotheby’s auction house in London would be auctioning off a previously missing illumination depicting the mining and processing of silver in Kutná Hora.

The London auction was attended by representatives from the gallery and from Central Bohemia’s regional government. Two other parties were interested in the auction, and although at times it looked as if the illumination would not be coming back to the Czech Republic, in the end Central Bohemia succeeded with a winning bid of 510,000 pounds.

The Kutná Hora illumination depicts a similar theme as the Kutná Hora Antiphonary and the Kutná Hora Gradual, from which we may presume that is was probably the frontispiece for a large choral book from one the town’s churches. The closest analogy in terms of motif, composition and painting style is the opening illumination of the Kutná Hora Gradual (c. 1490) from the workshop of Matthew the illuminator, whose name is also associated with the Smíškov Gradual from 1490–1495. Karel Chytil identified the painter as an illuminator residing in Prague’s Old Town (between ± 30 April 1495 and 11 January 1496). The illumination’s author apparently studied in Matthew’s workshop. He made use of the same workshop patterns, as can be seen in the use of many similar compositions as those found in the Kutná Hora Gradual. The different depiction of architecture, landscape, human figures and clothing reflect the somewhat later date of creation.

The late-medieval parchment painting is unique not only in its choice of subject and artistic quality, but also in its unusually large format. Although prior to the London auction most art historians had seen it only on a black-and-white reproduction and since the Middle Ages it had never been exhibited in public, experts always considered it one of the most important illuminations to have been made north of the Alps. The large Gothic painting on parchment (height: 643 mm, width: 442 mm), which in all likelihood was originally part of a liturgical manuscript from Kutná Hora, depicts the mining, sale, and processing of silver ore in Kutná Hora in the late 15th century in a detailed and almost documentary-like manner.

The Kutná Hora illumination shows not only the mining of ore and its milling, washing and subsequent sale to ore merchants, but also presents its further processing and smelting to produce silver, which was then used to mint coins. The illumination is the oldest surviving illustration to capture the entire technological process that was centred in Kutná Hora from the 13th to the 17th century.

Kutná Hora Illumination is deposited in the Gallery of the Central Bohemian Region (GASK) and is on display on special occasions. (www.gask.cz) 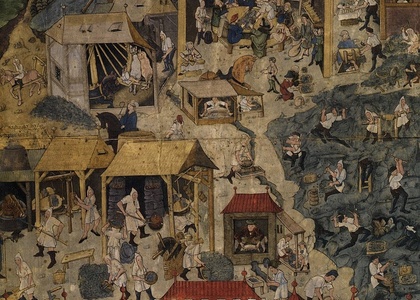 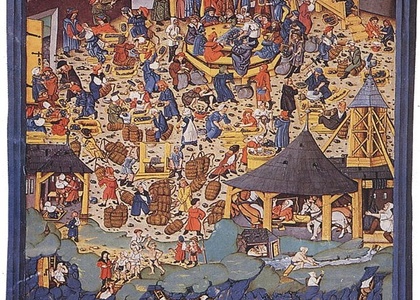