Church of Our Lady “Na Náměti

The Church of Our Lady (the Virgin Mary) “Na Náměti“ was originally built outside of the city‘s fortifications and was intended to serve as a cemetery church. The name refers to the medieval ore market, which was located in the immediate vicinity of the present church. The construction was initially financed from the sale of ore that fell to the ground during trading activities, was sweep into a pile and subsequently sold for the benefit of the church.

The history of the church probably began to be written in the first quarter of the 14th century. Lightning struck the tower in 1470, causing a devastating fire and reduced the church to just its perimeter walls. The subsequent reconstruction can thus be seen almost as a new building. In time, masons from the St Barbara smelter also participated in the reconstruction, initially led by Matyáš Rejsek, later having been trained by the renowned Benedikt Ried.

An interesting feature of the church is a staircase attached externally to its slender tower. The north staircase, built on an (at that time) uncharacteristic square floor plan, leads to an internal choir loft. The south (spiral) staircase comprises of dual spiral staircases, which wind side-by-side in a single screw, making it possible to ascend as well as descend simultaneously. They give access to the treasury on the first floor of the tower.

The interior of the church is dominated by an elongated presbytery with a neo-Gothic winged altarpiece, decorated with motifs from the life of Mary. The central painting of The Assumption is the work of Diviš of Litoměřice, on the predella of the altar is the painting of Ecce Homo by the master Michal. The two altars in the side naves of the church are also rare. All of the altar‘s paintings date back to the first half of the 16th century.

The design of the entire interior of the church adheres to axial symmetry, with the pulpit from the start of the 16th century being the only significant disruption to this geometry. This Late Gothic gem was probably created by Wendel Roskopf, a German stonemason and builder, who had briefly worked in Ried's smelter at St Barbara. The hexagon marlstone pulpit is decorated with reliefs of the Church Fathers, Jerome, Ambrose, Gregory and Augustine. It is interesting to note that the pulpit of the Church of Our Lady is still used during church services.

Petr Jan Brandl, one of the greatest Czech Baroque painters, was buried in the front section of the main nave in 1735. A marble plaque located on the left side of the triumphal arch makes reference to his tombstone.

Information about church services, opening hours and entrance fee for the Church of Our Lady “Na Náměti“ 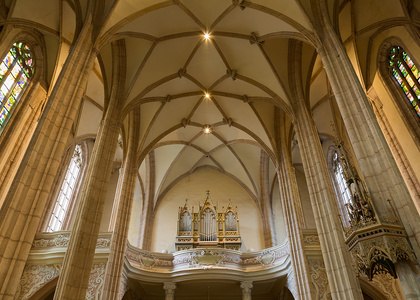 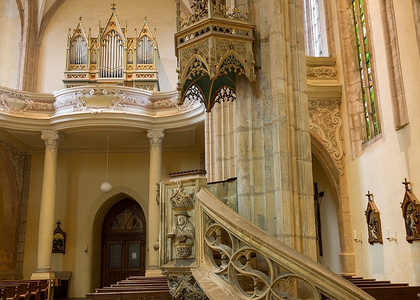 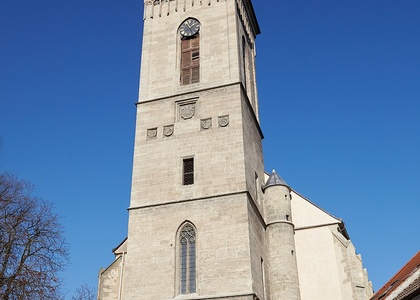